The Challenge and Potential of Solar Power 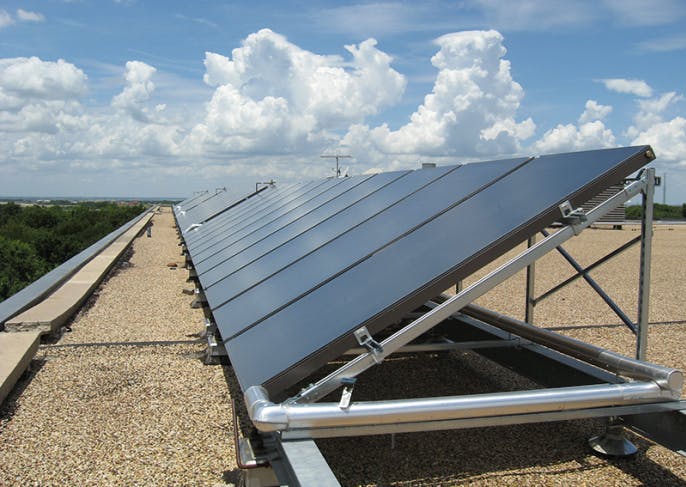 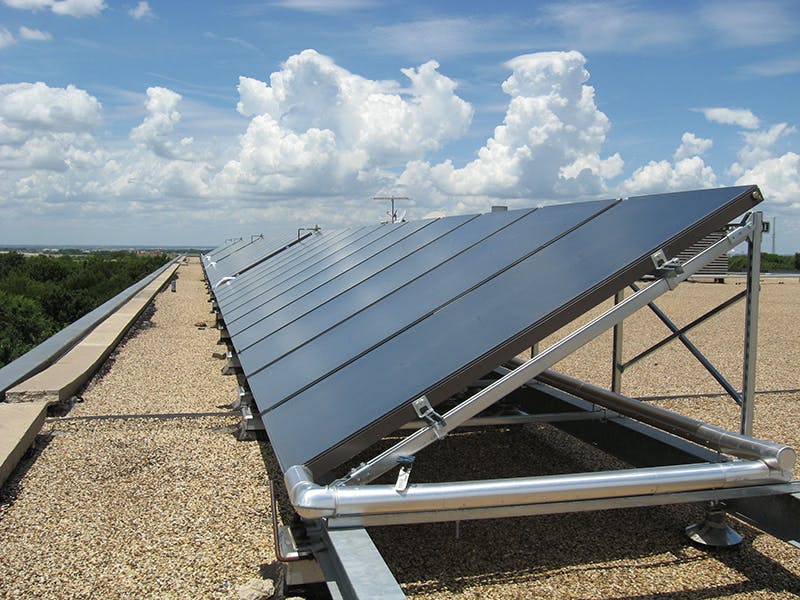 From the Chinese using mirrors to reflect light to ignite torches for religious purposes in 20 A.D., to the Anasazi people in North America building their cliff dwellings on the south-facing cliff to capture the winter sun in the 1200’s A.D., people have looked to the sun as a source of power and warmth, and with good reason. According to the Solar Energy Industries Foundation (SEIA), enough sunlight strikes the earth every 90 minutes to provide the entire planet's energy needs for one year. Harnessing this power is still a challenge, but today, we are on the verge of seeing solar power become a leading renewable energy technology.

Solar is a popular and attractive energy source for many reasons: • Using the sun for energy eliminates reliance on fossil fuels • Once it pays for itself, the power provided is virtually free • Building owners can earn Alternative Energy Points when pursuing LEED certification • Solar power decreases reliance on electric utilities, reducing demand on the power grid and the expense of expanding power plants • Solar is a versatile alternative energy source: panels can go in a wider variety of places

Scientists at Bell Labs developed photovoltaic (PV) technology in the 1950’s. PV cells are composed of a semiconductor material that makes them able to convert light into electricity. The first silicon PV cells capable of converting the sun’s energy into power to run ordinary electrical equipment had only 4 percent efficiency – that’s the percentage of the solar energy shining on a PV cells that’s converted into usable electricity. The majority of commercially available solar panels on the market today have efficiency ratings from 14 to 16 percent, with the most efficient coming in as high as 22.5 percent. Improving conversion efficiency is a key goal of research because it helps make PV technologies cost-competitive with energy derived from fossil fuels. Here are the most common types of PV technology available today:

Silicon Photovoltaics: Silicon is the most prevalent material used to make solar PV panels because it is plentiful, easy to work with and can be produced on a large-scale. Silicon PV cells contain silicon atoms connected to one another to form a crystal lattice that provides an organized structure to efficiently convert light into electricity. Silicon PV cells are highly efficient, are the least expensive solar cells to manufacture and last a long time in the field.

Thin-Film Photovoltaics: Thin-film PV material can be only micrometers in thickness, making it possible to produce solar cells that are extremely light and flexible. A thin-film solar panel is made by depositing one or more layers of thin PV on a supporting material such as glass, plastic, or metal. Cadmium telluride (CdTe) and copper indium gallium diselenide (CIGS) are the two main types of thin-film PV available. CdTe is second to silicon as the most common PV material, making it a cost-effective alternative, but is still not as efficient as silicon. CIGS cells have favorable properties, but are also less efficient as well as more expensive to manufacture than silicon PV.

Organic Photovoltaics: Organic PV, or OPV, cells are composed of carbon-rich polymers and can be tailored to enhance a specific function of the cell, such as sensitivity to a certain type of light. While still experimental, this technology could be less expensive to manufacture and has the potential to provide electricity at a lower cost than silicon or thin-film PV. Today, OPV cells are only about half as efficient as silicon PV and have shorter operating lifetimes.

The Challenge & Potential of Solar Despite its many benefits, solar has been slow to expand for a number of reasons. Primarily, it has been the cost of solar panels. In addition, since the panels don’t generate power at night or on extremely overcast days, power generated but unused must be stored for later use. Power storage has been a challenge because of the cost and availability of batteries and their perceived danger. Finally, a solar array requires a large roof surface or land area for the panels.

Fortunately, the cost of solar continues to fall. The price per watt of solar energy was more than $76 in 1977 but by 2015, had come down to $0.57/watt, or 130 times less within 38 years (Bloomberg Energy Finance). This is central to the boom that solar is experiencing now. With lower costs, solar has become more affordable to install and pays for itself sooner. As demand has increased, prices have further decreased, dropping 62 percent over the last five years and 19 percent from Q3 2015 to Q3 2016, according to SEIA.

2016 was a record-breaking year for solar in the U.S., when 14,762 MW of solar PV was installed, almost doubling the capacity installed in 2015. SEIA also said that solar represented 39 percent of all newly installed electric capacity through Q3 2016, making solar the number one source for new capacity. SEIA calculates that in Q3 2016, one MW of solar was added every 32 minutes. Now, there are almost 36,000 MW of total solar capacity installed in the U.S.

Residential solar has been the fastest growing segment in recent years, but community solar and commercial segments are also growing. The utility-scale segment also continues to be a leading driver in the U.S. solar industry, installing nearly 10,000 MW in 2016.

Leading solar growth in the commercial sector are big box stores, manufacturers, and warehouse related businesses: operations that include large roof spans. For example, Amazon recently announced the company will install solar panels on the rooftops of its fulfillment facilities around the world, including 15 centers in the U.S. this year and as many as 50 globally by 2020. Other commercial leaders in solar energy are Target (147.5 MW), Walmart (145 MW), Apple (93.9 MW), Costco (50.7 MW) and Macy’s (38.9 MW). All are on the SEIA’s top ten list of American businesses that have installed solar. The solar energy trade group says that corporate solar systems are generating enough clean electricity to offset more than 1.2 million tons of harmful carbon emissions a year.

Solar isn’t just for big players, either. Some residents and businesses in Brooklyn, New York, are installing solar panels and using a virtual trading platform to enable solar energy producers to sell excess electricity credits from their systems to buyers in the group.

Cities are going solar as well. Some, like Houston, are adding solar generated power to the mix of sources that deliver electricity to the city. Others like Kearney and Nebraska are installing their own solar panels. Kearney’s solar array, the state’s largest, will generate five percent of the city’s peak demand on sunny days. 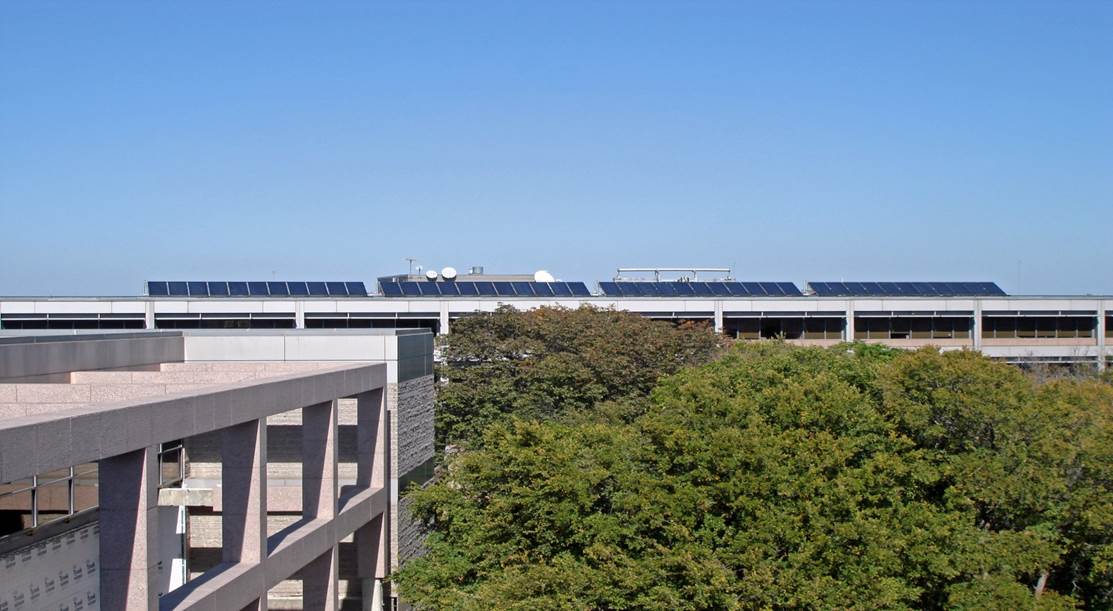 The Future of Solar SEIA forecasts that 13,200 MW of solar PV will be installed in the U.S. in 2017 and that over the next five years, the cumulative U.S. solar market will nearly triple in size. By 2022, the SEIA predicts that more than 18,000 MW of solar PV capacity will be installed annually and 24 states will each have more than 1,000 MW of operating solar PV, up from nine states today.

In the future, not only will solar panels become even more affordable and efficient, improvements in battery technology will also make storing solar energy feasible, opening up many additional opportunities to use this power source. Meanwhile, as the price of solar continues to fall and it becomes a viable alternative to traditional electric power, more and more businesses, public entities and home owners will add solar arrays to their facilities. In some cases, facility owners may even generate enough solar energy to not only power their buildings but also sell power back to “the grid.” For most, solar will be part of a multi-source approach to powering a facility that provides cost savings and greater flexibility for electricity users.

As photovoltaics research and development continues and new materials and techniques for gathering solar energy emerge, new applications for solar power will also appear. The rapid growth and development of this power source over the past few years makes it clear that there is a bright future ahead for solar power producers and electricity users alike.