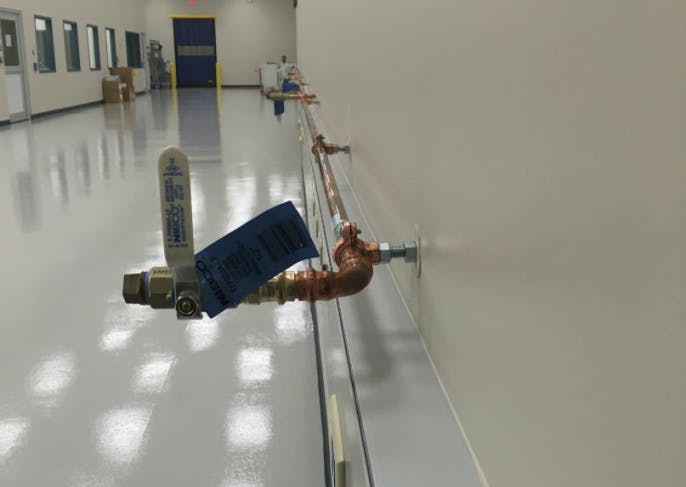 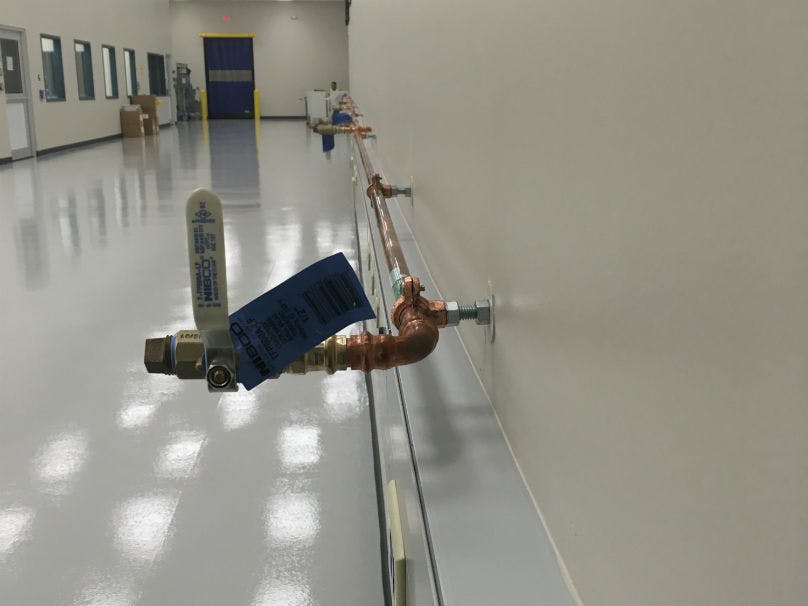 The Standards and Other Basics of Cleanroom Design

In the first installment of our series on the design and construction of cleanrooms, we covered the internationally recognized standards that govern cleanroom design, discussed the utility matrix that guides the cleanroom design, and reviewed the equipment and systems that are included in a cleanroom. Now we are ready to dig deeper and look at some of the important components that are included in a cleanroom: the make-up and exhaust air systems and the filters used to remove particles from the air in the clean space.

Cleanroom designers use the exhaust flow rates given in the utility matrix (UM) to determine the MUA quantities needed to cover the air exhausted from the building plus surplus to pressurize the building, based on this formula: MUA=EXH+10%. The clean spaces will typically be positively pressurized with respect to surrounding spaces. In addition, there is usually a pressure cascade within the clean spaces to ensure that particulate won’t travel in the air stream from a lower classification of clean space into a higher one. For example, a class 1 cleanroom will have a pressure of +0.10” while the adjacent Class 10 space will drop to +0.08” pressure. The adjacent gowning room will be pressurized at +0.05” and general building areas will be at +0.03”. This figure illustrates a cleanroom pressure cascade:

Other spaces within the facility will also have specific pressurization requirements. For example, rooms that contain the gases and chemicals used in manufacturing that occurs in the facility will have negative pressure with respect to surrounding spaces. This will prevent contamination of the cleanrooms from whatever materials are contained in these rooms.

Cleanroom Humidity Control The MUA system is also responsible for controlling the humidity levels throughout the clean spaces in order to prevent static electricity and keep the air free of particles. Within clean environments relative humidity is maintained at levels between 40 to 50 percent. Because cleanrooms have much narrower tolerances than traditional buildings, variations of only one to three percent are allowed in the most stringent environments. Humidity is controlled using the standard methods of adding moisture to the air stream or applying extra cooling with a chilled water coil and then reheating the air to dry it out. An important difference is that cleanrooms must use deionized water when adding moisture to prevent introducing particulates into the air from the water.

Cleanroom Filters Cleanrooms are classified based on the number of particles equal to and greater than 0.5 per micron (µm) in one cubic foot of air. The cleanliness of the air delivered to the cleanroom is primarily determined by the ceiling filter coverage as well as the efficiency of the filters. Larger particles are removed from outside air at initial intake using a pre-filter. Within the cleanroom, HEPA or ULPA filters remove the smallest particles from the air. HEPA filters are 99.97 to 99.995 percent efficient at 0.3 micron MPPS while ULPA filters are rated 99.9995 to 99.9999995 percent efficient at 0.12 micron MPPS. The pre-filter, which may be changed frequently, also serves to extend the life of the more expensive HEPA and ULPA filters. For each cleanroom classification there is a related filter efficiency recommendation that should be followed: 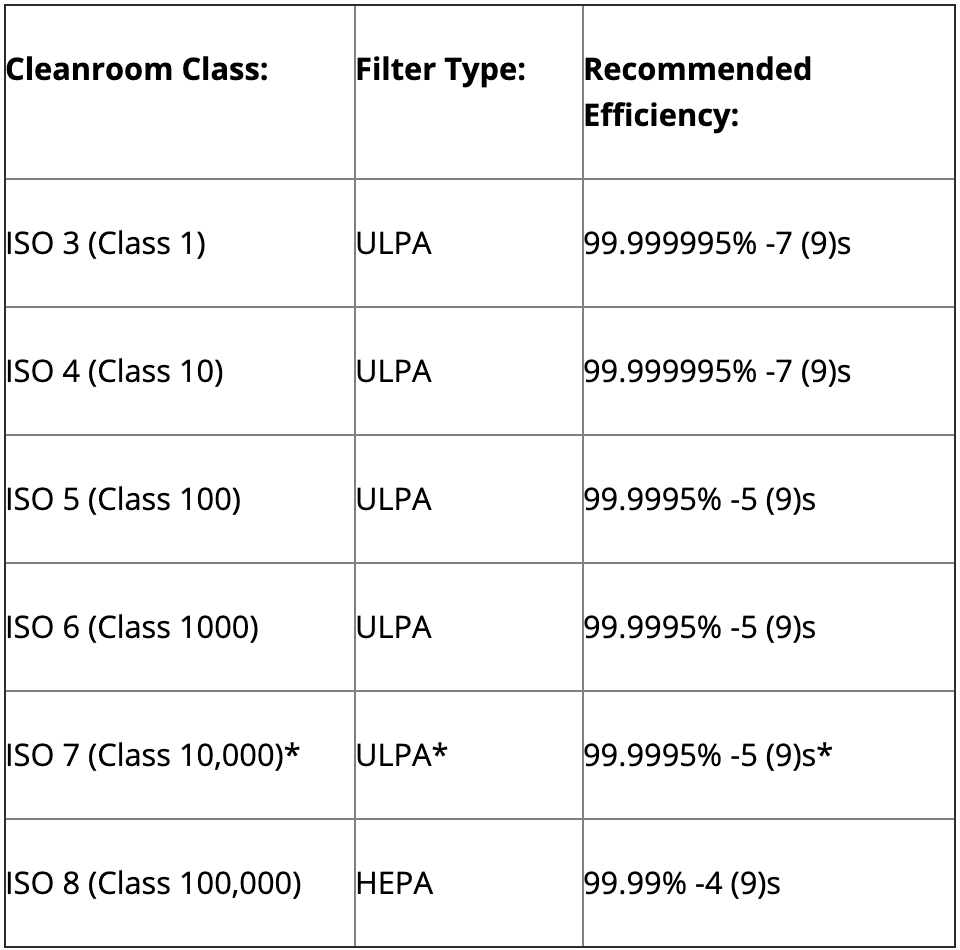 * ISO 7 (10k) cleanroom is typically designed to go to higher classification in future. If no upgrade, HEPA –4(9)s filter can be used.

The Exhaust Air System The exhaust air system serves to remove air that has warmed above the required temperature of the clean space and that may contain particulate or other contaminates. To determine the exhaust quantities required, cleanroom designers carefully analyze the tool, codes, and emergency requirements of the room. The exhaust system performs an important role maintaining conditions inside the facility, and also protects the outside environment.

Many processes completed within the cleanroom produce pollutants that must be removed. Depending on the specific activities performed, acid and caustic scrubbers or volatile organic compound (VOC) abatement systems will need to be added to the exhaust system to treat the air prior to discharge to the environment. Furthermore, the exhaust system in a hazardous production material (HPM) facility must be designed and installed to remove any potentially hazardous fumes that may escape from fabrication or support equipment. Consequently, designers must have a clear understanding of the processes performed in the cleanroom and the related by products that must be removed from the exhaust air.

In the next installment of this series, we will focus on the three main systems used to control the recirculation of air within the cleanroom space.

Learn about the C1S Group Cleanroom design and construction process.